A while ago I posted the first of my planned miniseries on the Matlab toolstrip (ribbon). Today I will expand that post by discussing how toolstrips can be added to Matlab GUIs. This post will remain at a high-level as the previous post, with followup posts drilling into the technical details of the toolstrip components (inner packages and classes).
We can add a Matlab toolstrip to 3 types of Matlab GUI windows:

Today I will show how to add a basic dynamic toolstrip to a ToolGroup (App, window type #2):

Most Matlab users are familiar with window types #1 and #3 (legacy and web-based figures), but type #2 may seem strange. In fact, it shouldn’t be: All the Matlab “Apps” and Desktop components use such a container of docked clients. For example, both the Matlab Editor and Desktop are containers of individual client windows (individual files in the Editor; Command Window, Workspace etc. in the desktop).
Similarly, when we dock figures, they dock as client windows into a container called “Figures” (this can be controlled programmatically: see my setFigDockGroup utility on the File Exchange). This is the basis for all Matlab “Apps”, as far as I am aware (some Apps may possibly use a different GUI container, after all there are ~100 Matlab Apps and I’m not familiar with all of them). Such Apps are basically stand-alone Tool Groups (client container windows) that contain one or more docked figures, a toolstrip, and a side-panel with controls (so-called “Data Browser”).
Note: MathWorks uses confusing terminology here, using the same term “App” for both MathWorks-created GUIs containers (that have toolstrips, Data Browser and docked figures) and also user-created utilities on the File Exchange (that do not have these). Unfortunately, MathWorks has chosen not [yet] to release to the general public its set of tools that enable creating true “Apps”, i.e. those that have a toolstrip, Data Browser and docked figures.
Today’s post will attempt to fill this gap, by showing how we can create user Apps that have a toolstrip and docked figures. I will ignore the Data Browser today, and will describe it in a future post. Since docking figures into a standalone user-created container is a solved problem (using my setFigDockGroup utility), this post will focus on adding a toolstrip to such a container.
A ToolGroup object (matlab.ui.internal.desktop.ToolGroup) is created either implicitly (by docking a figure into a group that has a new name), or explicitly (by invoking its constructor):

Some things only work properly after the app is displayed, so let’s display the ToolGroup (however, note that for improved performance it is better to do whatever customizations and GUI updates that you can before the app is made visible):


An annoying quirk with ToolGroups is that they automatically close when their reference handle is deleted from Matlab memory. The specific behavior changes depending on the contents of the container and the Matlab release, but in general it’s safest to preserve the hToolGroup variable, to prevent the window from closing, when this variable goes out of scope, when the function (in which we create the ToolGroup) returns. There are many ways to persist this variable. Here’s one alternative, in which we persist it in itself (or rather, attached to its internal Java peer control):

internal.setJavaCustomData is an undocumented Matlab function that adds a new custom property to a Java reference handle. In our case, it adds a CustomData property to the jToolGroup handle and sets its value to the Matlab hToolGroup handle. The source code for internal.setJavaCustomData is available in %matlabroot%/toolbox/shared/controllib/general/+internal/setJavaCustomData.m and is very simple: it essentially uses the old schema-based schema.prop method for adding new properties to handles. Schema is an old deprecated mechanism that is mostly replaced by the newer MCOS (Matlab Class Object System), but for some specific cases such as this it’s still very useful (the standard addprop function can add new properties to Matlab GUI handles, but not to Java reference handles).
Finally, let’s discard the Data Browser side panel (I’ll discuss it in a separate future post):

Adding a toolstrip to the ToolGroup

Now that we have the basic container ready, let’s add a toolstrip. To simplify matters in this introductory post (after all, I have still not described the internal packages and classes that make up a toolstrip), we’ll use some of the tabs used in the showcaseToolGroup example that I discussed in my previous post. You can see the relevant source code in %matlabroot%/toolbox/matlab/toolstrip/+matlab/+ui/+internal/+desktop/*.m, in case you want to jump ahead and customize your own toolstrip tabs, groups and buttons. In the code snippet below, we first create an empty TabGroup, then add toolstrip tabs into it, and finally add this TabGroup into our ToolGroup using its addTabGroup(hTabGroup) method:

We now have an “App” that has a toolstrip, but no clients (yet), and a hidden Data Browser side-panel: 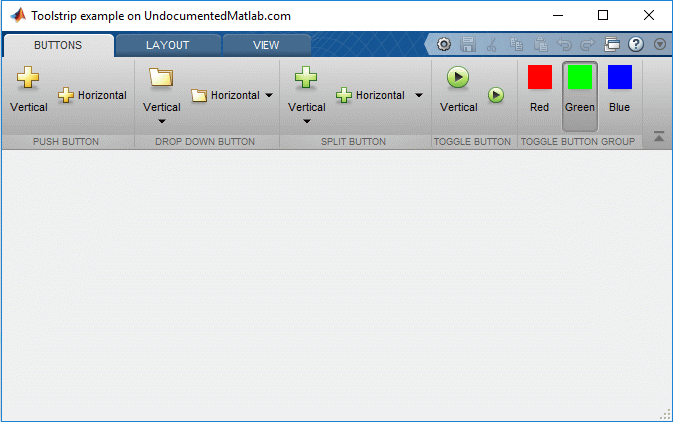 There are two easy variants for adding docked figures in a ToolGroup: The easiest is to use the ToolGroup’s addFigure(hFigure) method:

The second variant enables to dock a figure that has a specific set of toolstrip tabs attached to it. These tabs will only display in the toolstrip when that particular figure has focus. We do this by creating a new TabGroup (just as we have done above), and then add the figure and TabGroup to the container using the ToolGroup’s addClientTabGroup(hFigure,hTabGroup) method:


In this example, the “Selection” and “Values” toolstrip tabs only appear when the 2nd figure (“2D”) has focus. A similar behavior exists in the Matlab Desktop and Editor, where some tabs are only shown when certain clients have focus.

Note that the “View” toolstrip tab (which enables setting the appearance of the docked figures: layout, tab positions (top/bottom/left/right), ordering etc.) is automatically added to the toolstrip and always appears last. We can remove this View tab using the ToolGroup’s hideViewTab() method. The tab will not immediately be removed, only when the toolstrip is repainted, for example, when we switch focus between the docked figures:

It’s relatively easy to dock figures into a standalone “App” window that has a custom toolstrip, which can even be dynamically modified based on the figure which is currently in focus. Naturally, this has little benefit if we cannot customize the toolstrip components: labels, icons, control type, grouping and most importantly – callbacks. This topic deserves a dedicated post, which I plan to be the next in this miniseries. Stay tuned – hopefully the next post will not take me as long to publish as this post (I was quite busy recently)…